Saudi Aramco’s Exploration and Petroleum Engineering Computer Center (ECC) is a three-story data center built in 1982. It is located in Dhahran, Kingdom of Saudi Arabia. It provides computing capability to the company’s geologists, geophysicists, and petroleum engineers to enable them to explore, develop, and manage Saudi Arabia’s oil and gas reserves. Transitioning the facility from mainframe to rack-mounted servers was just the first of several transitions that challenged the IT organization over the last three decades. More recently, Saudi Aramco reconfigured the legacy data center to a Cold Aisle/Hot Aisle configuration, increasing rack densities to 8 kilowatts per rack (kW/rack) from 3 kW/rack in 2003 and nearly doubling capacity. Further increasing efficiency, Saudi Aramco also sealed openings around and under the computer racks, cooling units, and the computer power distribution panel in addition to blanking unused rack space.

The use of computational fluid dynamics (CFD) simulation software to manage the hardware deployment process enabled Saudi Aramco to increase the total number of racks and rack density in each data hall. Saudi Aramco used the software to analyze various proposed configurations prior to deployment, eliminating the risk of trial and error.

In 2015 one of the ECC’s five data halls was modified to accommodate a Cold Aisle Containment System. This installation supports the biggest single deployment so far in the data center, 124 racks of high performance computers (HPC) with a total power demand of 994 kW. As a result, the data hall now hosts 219 racks on a 10,113-square-foot (940-square-meter) raised floor. To date, the data center hall has not experienced any temperature problems.

Increasing demand by ECC customers requiring the deployment of IT hardware and software technology advances necessitated a major reconfiguration in the data center. Each new configuration increased the heat that needed to be dissipated from the ECC. At each step, several measures were employed to mitigate potential impact to the hardware, ensuring safety and reliability during each deployment and project implementation.

For instance, Saudi Aramco developed a hardware deployment master plan based on a projected life cycle and refresh rate of 3–5 years to transition to the Cold Aisle/Hot Aisle configuration. This plan allows for advance planning of space and power source allocation with no compromise to existing operation as well as fund allocation and material procurement (see Figures 1 and 2). 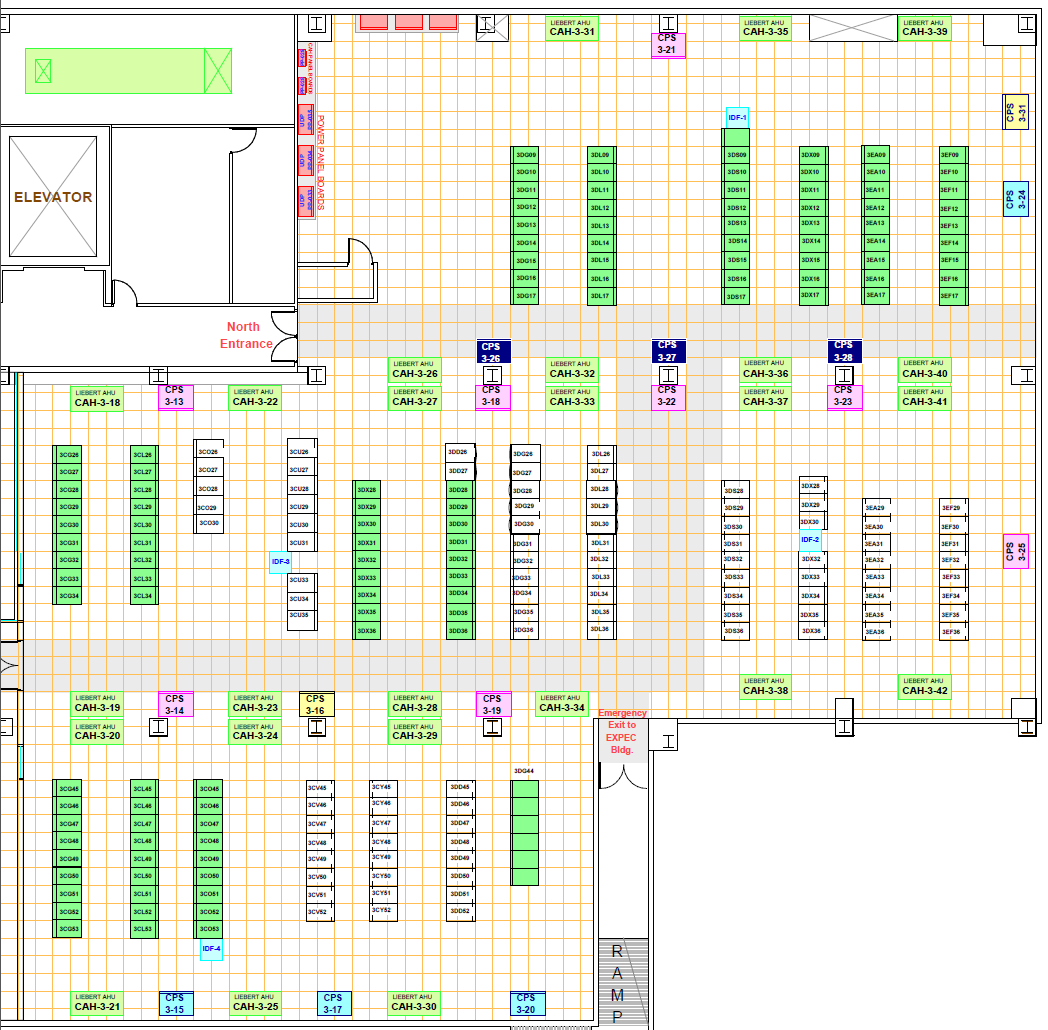 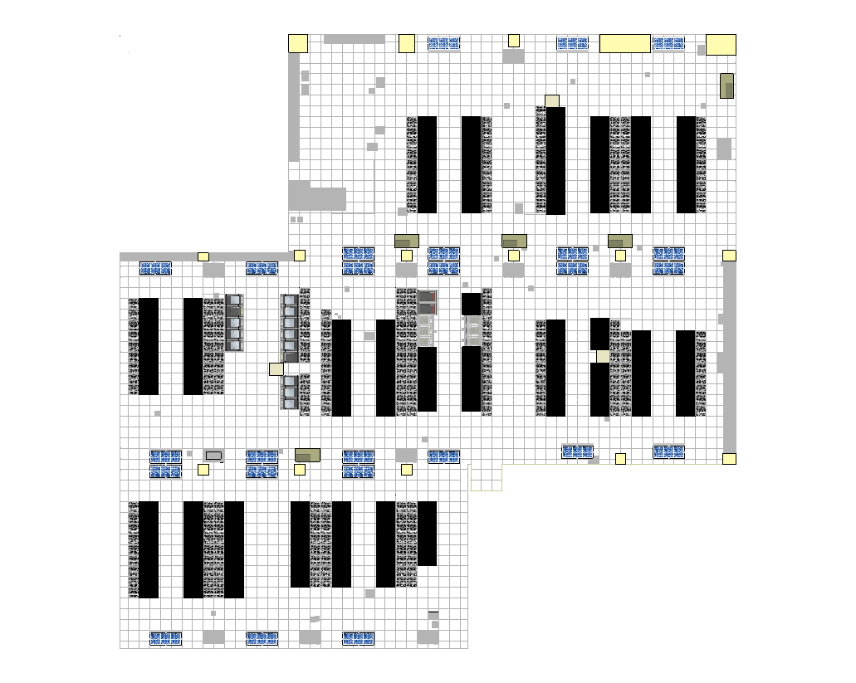 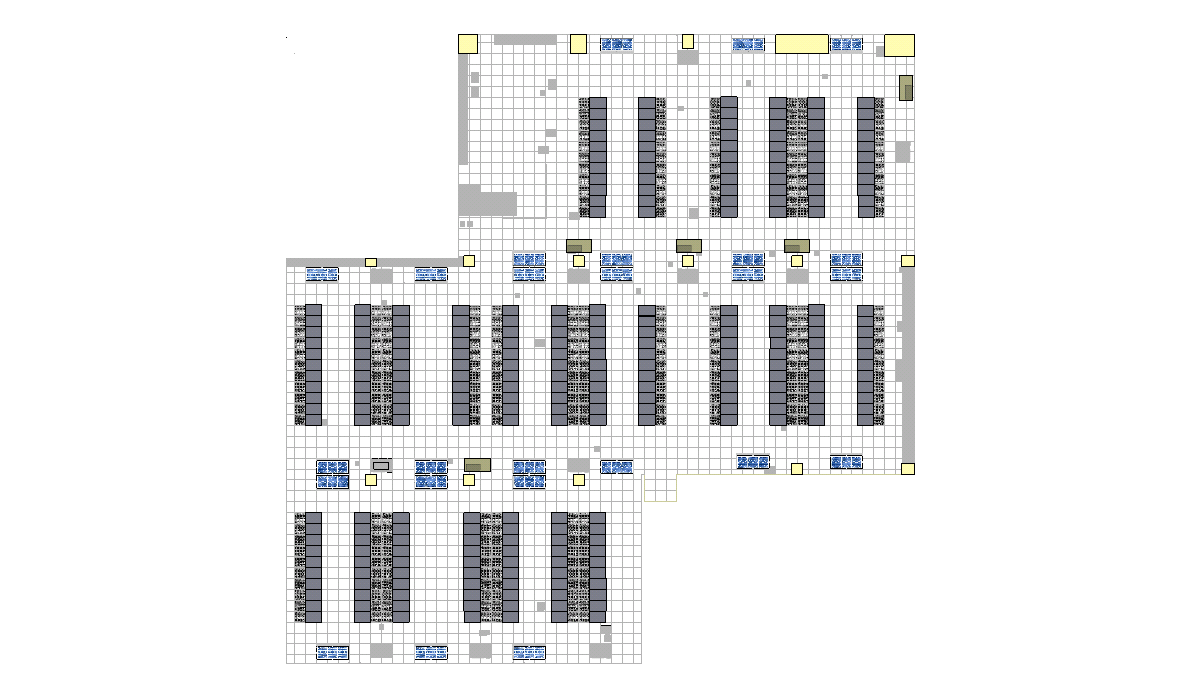 Subsequently, facility requirements based on these limiting factors were shared with the technology planning team and IT system support. The checklist includes maximum weight, rack dimensions, and the requirement for blanking panels and sealing technologies to prevent air mixing.

Other features of the data center include:

In 2007, Saudi Aramco commissioned the CFD modeling software company to prepare baseline models for all the data halls. The software is capable of performing transient analysis that suits the company’s requirement. The company uses the modeling software to simulate proposed hardware deployment, investigate deployment scenarios, and identify any stranded capacity.The modeling company developed several simulations based on different hardware iterations of the master plan to help establish the final hardware master plan with each Hot Aisle not exceeding a 125-kW heat load on a 16-rack Hot Aisle and not more than 8 kW per rack.  After the modeling software company completed the initial iterations, Saudi Aramco acquired a perpetual license and support contract for the CFD simulation software in January 2010.

Saudi Aramco finds that the CFD simulation software makes it easier to identify and address heat stratification, recirculation, and even short-circuiting of cool air. By identifying the issues in this way, Saudi Aramco was able to take several precautionary measures and improve its capacity management procedures, including increasing cooling efficiency and optimizing load distribution.

With the CFD software simulation results at hand, the facilities management team looked for other means to gather data for use in future cooling optimization simulations while validating the results of CFD simulations. As a result, the facilities management group decided to install a temperature and humidity monitoring system. The initial deployment was carried out in 2008, with the monitoring of subfloor air supply temperature and hardware entering temperature.

At that time, three sensors were installed in each Cold Aisle for a total of six sensors. The sensors were positioned at the ends of each end of the row and in the middle, at the highest point of each rack. Saudi Aramco chose these points to get better understanding of the temperature variance (∆T) between the subfloor and the highest rack inlet temperature. Additionally, Saudi Aramco uses this data to monitor and ensure that all inlet temperatures are within the recommended ranges of ASHRAE and the manufacturer.

The real-time temperature and humidity monitoring system enabled the operation and facility management team to monitor and document unusual and sudden temperature variances allowing proactive responses and early resolution of potential cooling issues. The monitoring system gathers data that can be used to validate the CFD simulations and for further evaluation and iteration.

The simulation models identified stratification, short circuiting, and recirculation issues in the data halls, which prompted the facilities management team to develop more optimization projects, including a containment system. In December 2008, a prototype was installed in one of the Cold Aisles (see Figure 3) using ordinary plastic sheets as refrigerated doors and Plexiglass sheets on aluminum frame, Saudi Aramco monitored the resulting inlet and core temperatures using the temperature and humidity monitoring system and internal system monitors prior to, during, and upon completion of installation to ensure no adverse effect with the hardware. The prototype was observed over the course of three months with no reported hardware issues. 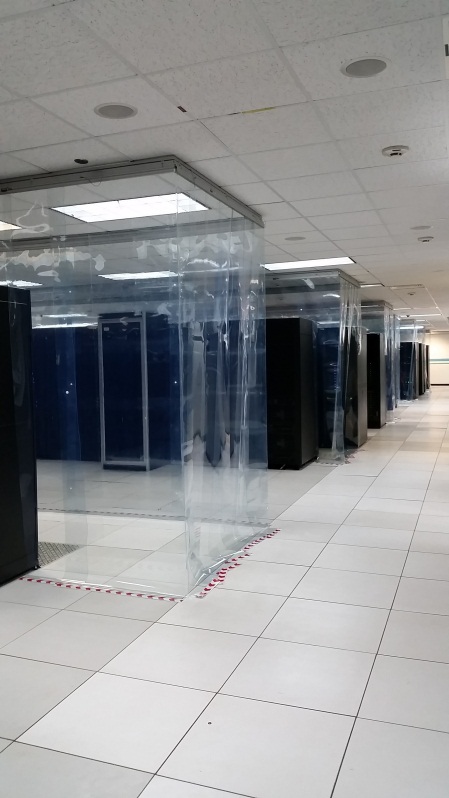 Following the successful installation of the prototype, various simulation studies were further conducted to ensure the proposed deployment’s benefit and savings. In parallel, Saudi Aramco looked for the most suitable materials to comply with all applicable standards, giving prime consideration to the safety of assets and personnel and minimizing risk to IT operations.

When the Cold Aisle was contained, Saudi Aramco noticed considerable improvement in the overall environment. Containment improved cold air distribution by eliminating hot air mixing with the supply air from the subfloor, so that air temperature at the front of the servers was close to the subfloor supply temperature. With cooler air entering the hardware, the core temperature was vastly improved, resulting in lower exhaust and return air temperatures to the cooling units. As a result, the data hall was able to support more hardware

From 2009 to 2012, the facility management team evaluated and screened several products It secured and reviewed the material data sheets and submitted them to the Authority Having Jurisdiction (AHJ) for evaluation and concurrence. Each of the solutions would require some modifications to the facility before being implemented. The facility management team evaluated and weighed the impact of these modifications as part of the procurement process.

Of all the products, one stood out from the rest; the use of easy to install and transparent material addresses not only safety but also eliminated the need for modifications of the existing infrastructure, which translates to considerable savings in terms of project execution and money.

Movement in and out of the aisle is easy and safe as people can see through the doors and walls. Additionally, the data hall lighting did not need to be modified since it was not obstructed. Even the fire suppression system was not affected since it has a fusible link and lanyard connector. The only requirement by AHJ prior to deployment was additional smoke detectors in the Cold Aisle itself.

To comply with this requirement, an engineering work order was raised for the preparation of the necessary design package for the modification of the smoke detection system. After completing the required design package including certification from a chartered fire protection engineer as mandated by the National Fire Protection Association (NFPA), it was established that four smoke detectors were to be relocated and an additional seven smoke detectors installed in the data hall.

Optimizations and improvements always come with challenges; the reconfiguration process necessitated close coordination between the technology planning team, IT system support, ECC customers, the network management group, Operations, and facility management. These teams had to identify hardware that could be decommissioned without impacting operations, prepare temporary spaces for interim operations, and then take the decommissioned hardware out of the data hall, allowing the immediate deployment of new hardware in Cold Aisle/Hot Aisle. Succeeding deployments follow the master plan, allowing the complete realignment process to be completed in five years.

Installation of the Cold Aisle Containment System did not come without challenges; all optimization activities, including relocating luminaires in the way of the required smoke detectors had to be completed with no impact to system operations. To meet this requirement, ECC followed a strict no work permit–no work procedure; work permits are countersigned by operation management staff on duty during issuance and prior to close out. This enabled close monitoring of all activities within the data halls, ensuring safety and no impact to daily operation and hardware reliability. Additionally, a strict change management documentation process was utilized and adhered to by the facility management team and monitored by operation management staff; all activities within the data halls have to undergo a change request approval process. 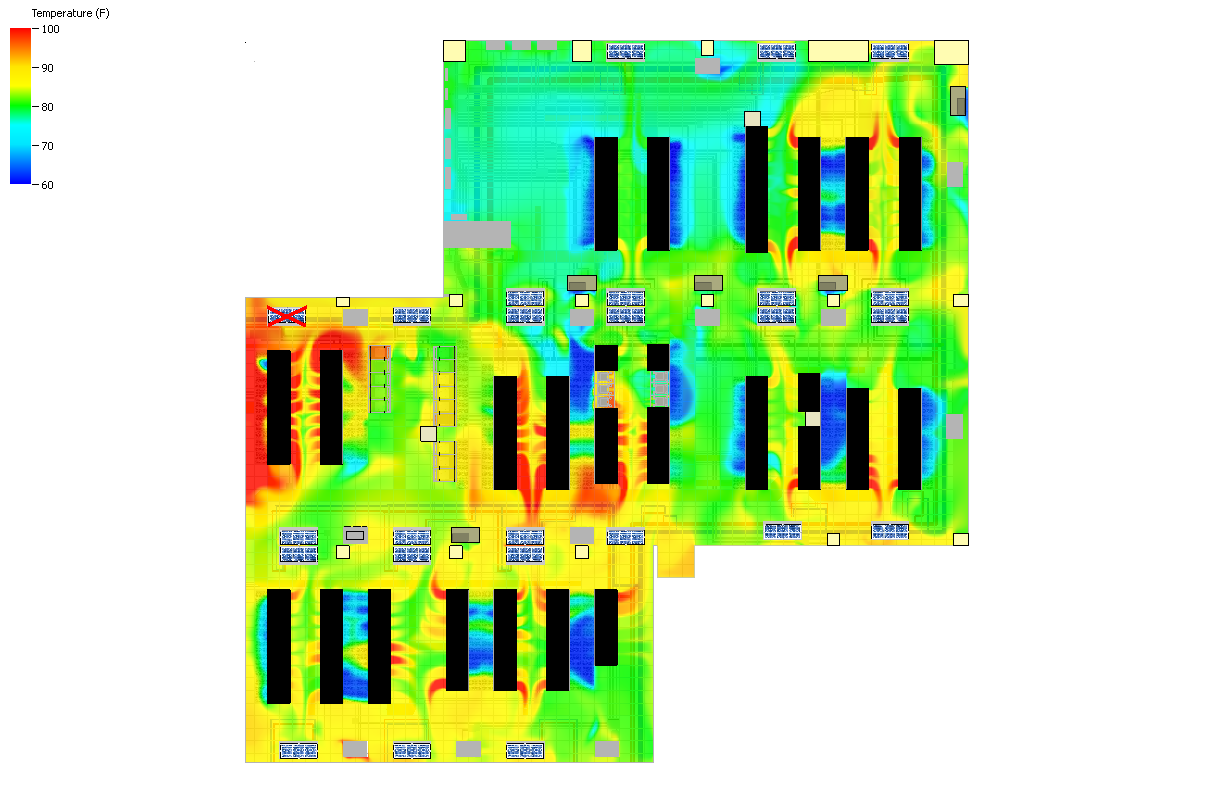 Figure 4a. Without Cold Aisle Containment 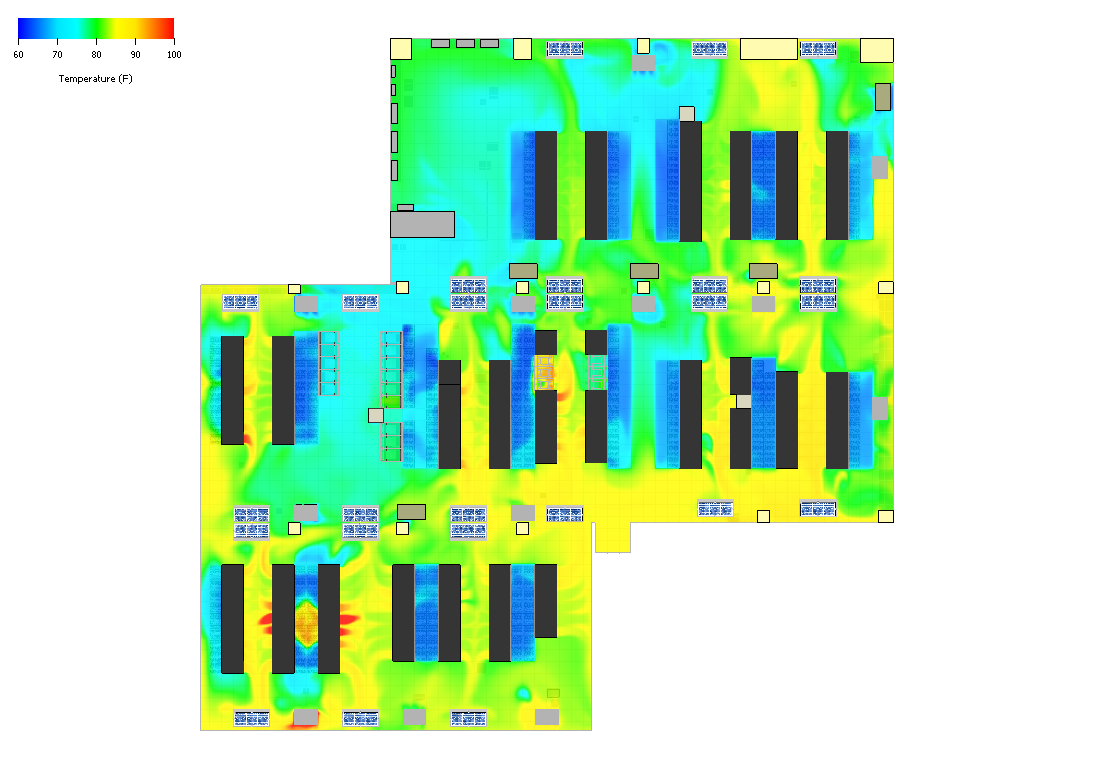 Figure 4b. With current Cold Aisle Containment (14 of 17 aisles) 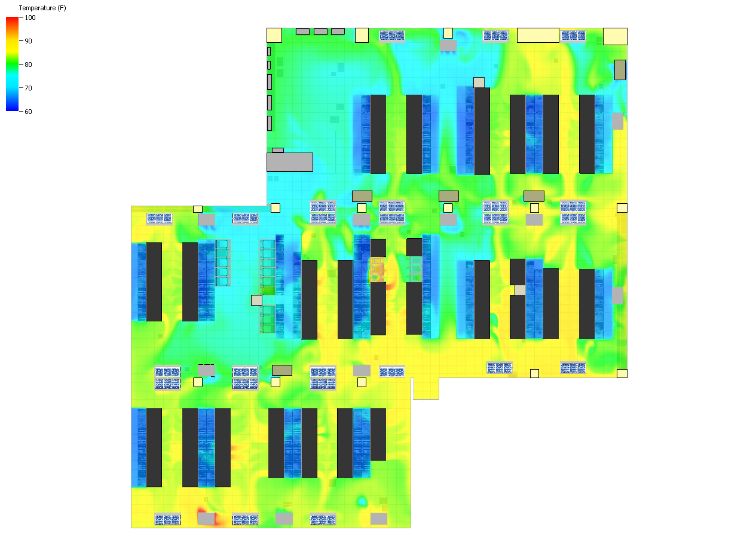 Figures 5–11 show that the actual power and temperature readings taken from the sensors installed in the racks validated the simulation results. As shown in Figures 4a and 5a, the power draw of the racks in Aisles 1 and 2 fluctuates while the corresponding entering and leaving temperature was maintained. On Week 40, the temperature even dropped slightly despite the slight increase in the power draw. The same can also be observed in Figures 6 and 7. All these aisles are fitted with a Cold Aisle Containment System. 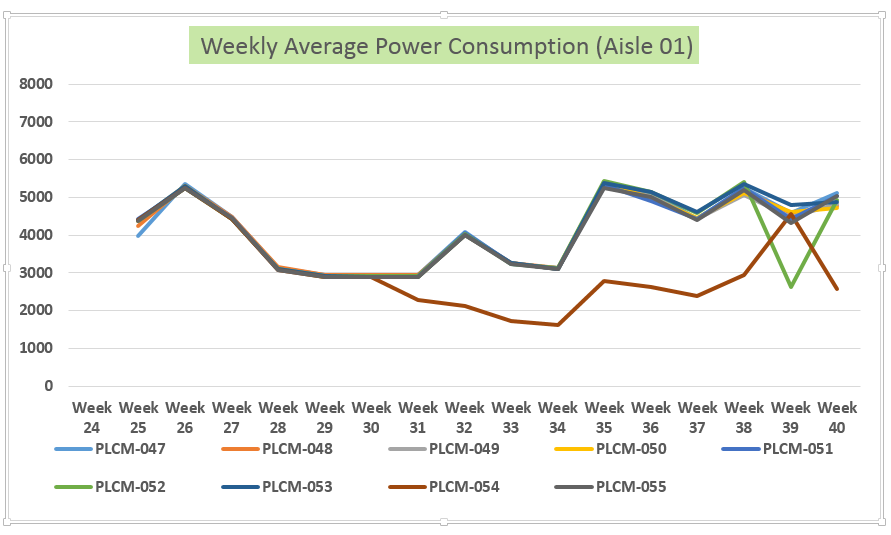 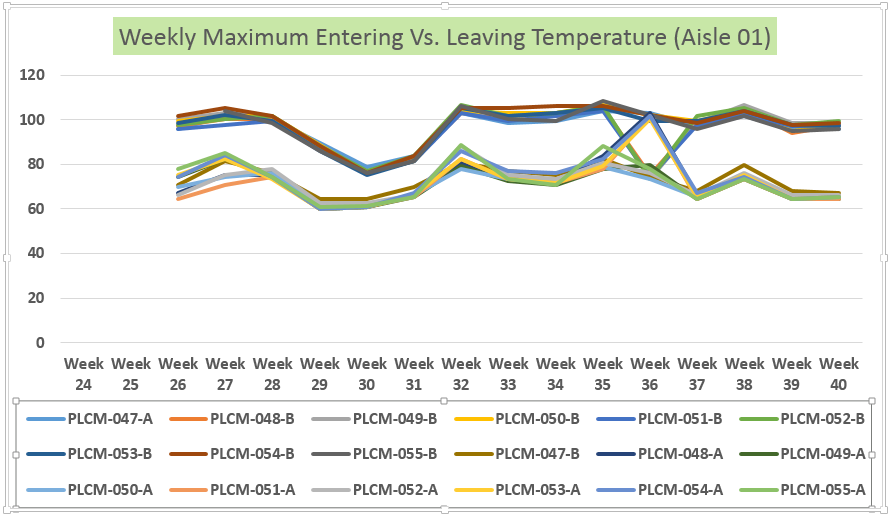 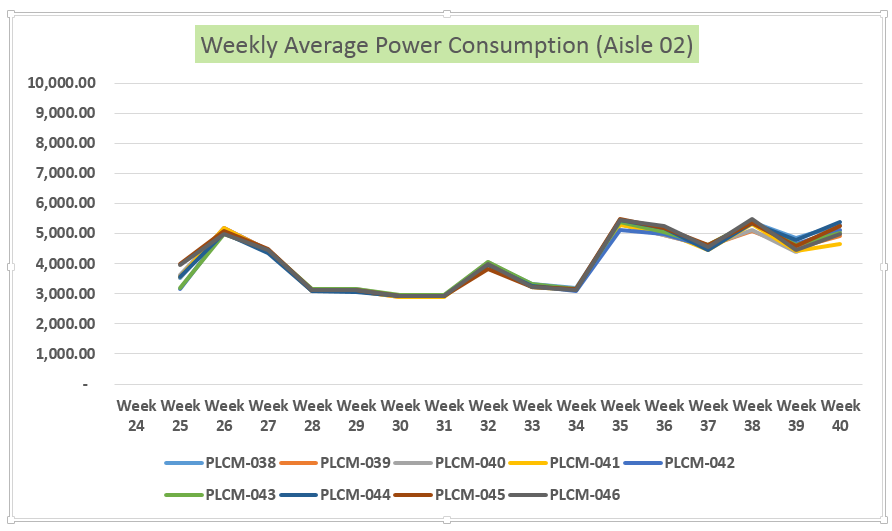 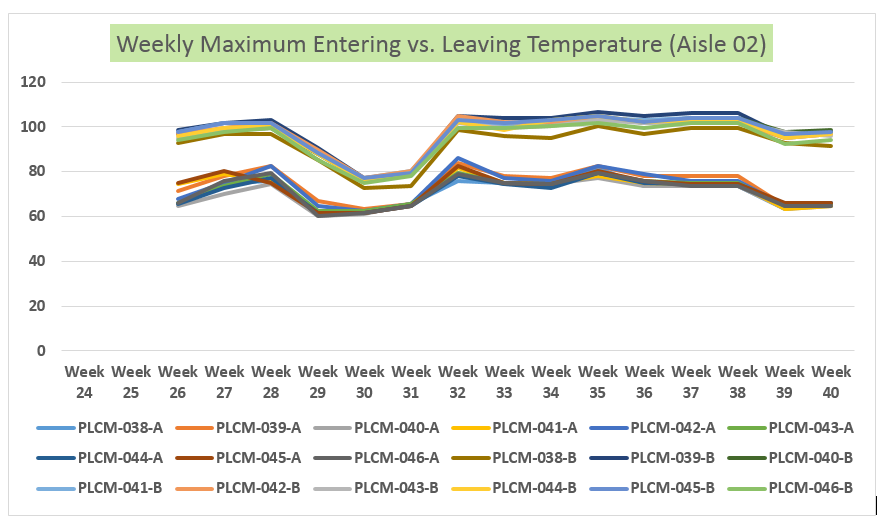 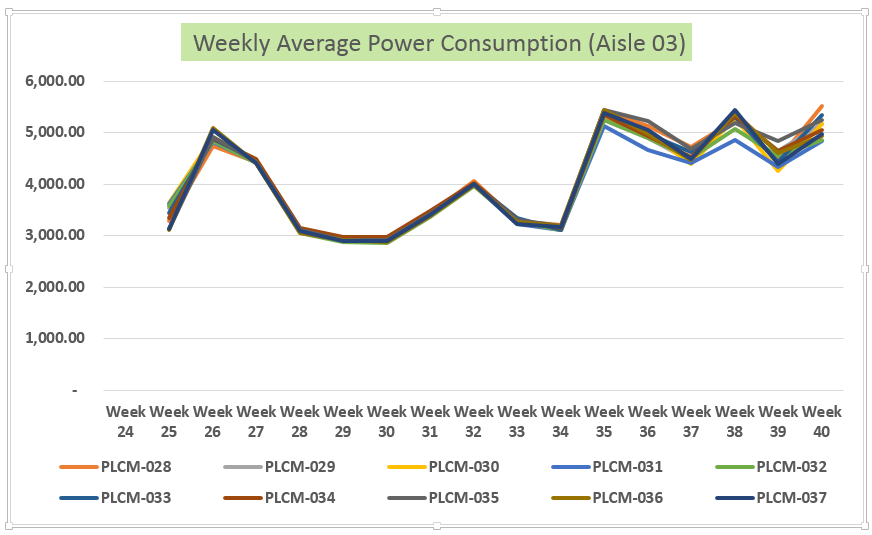 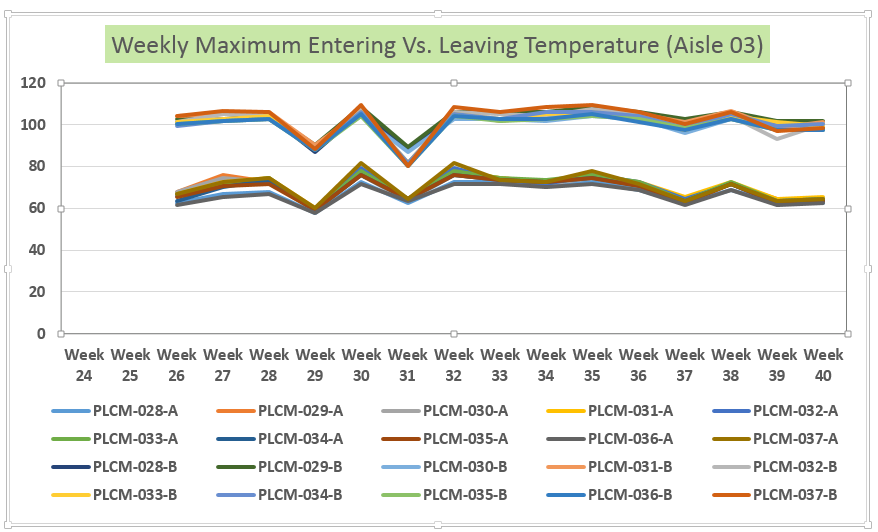 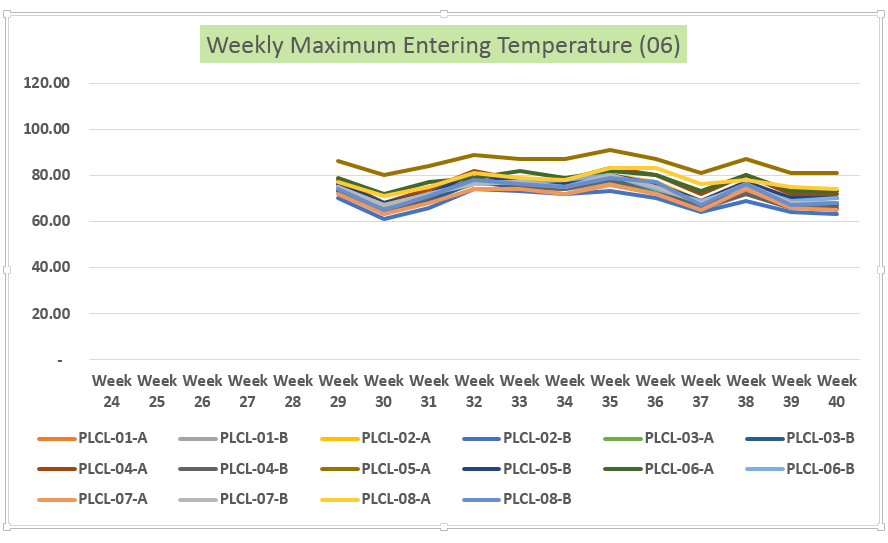 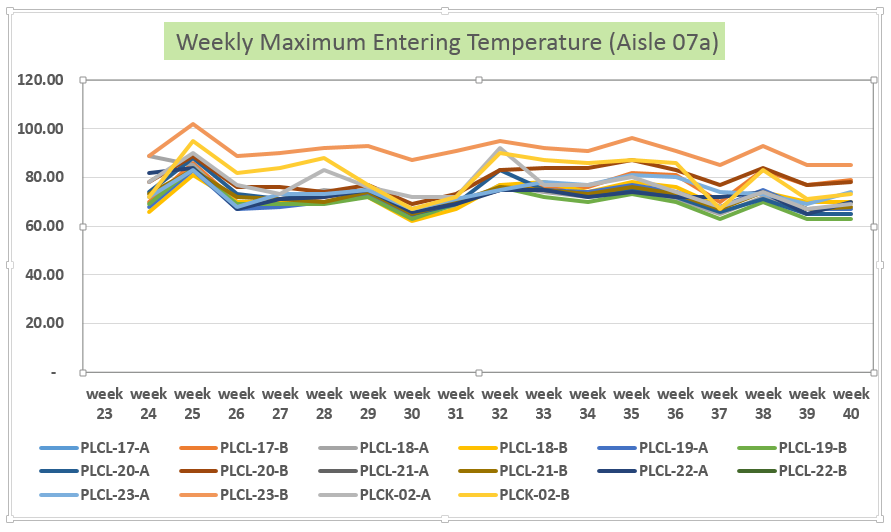 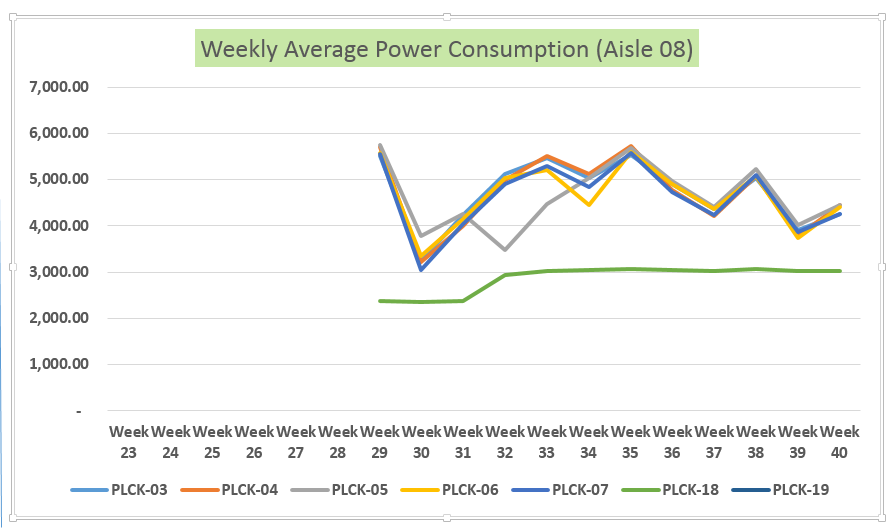 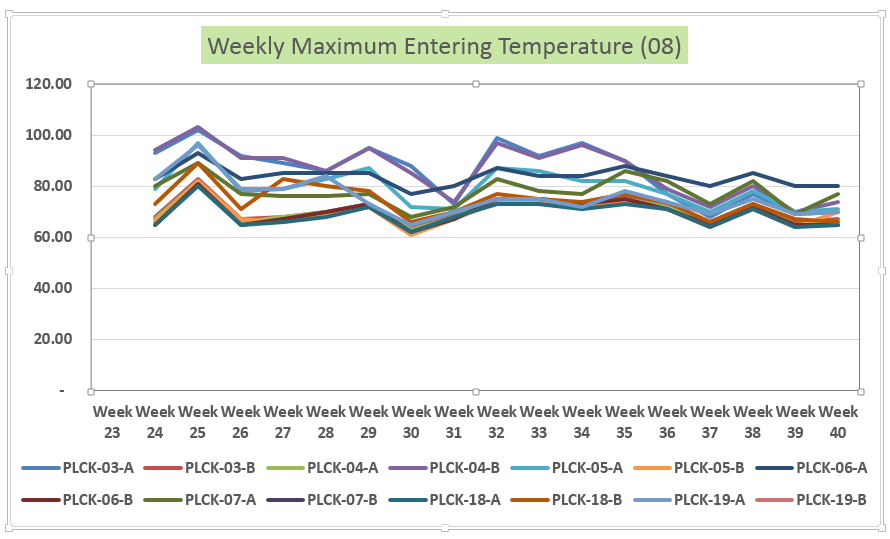 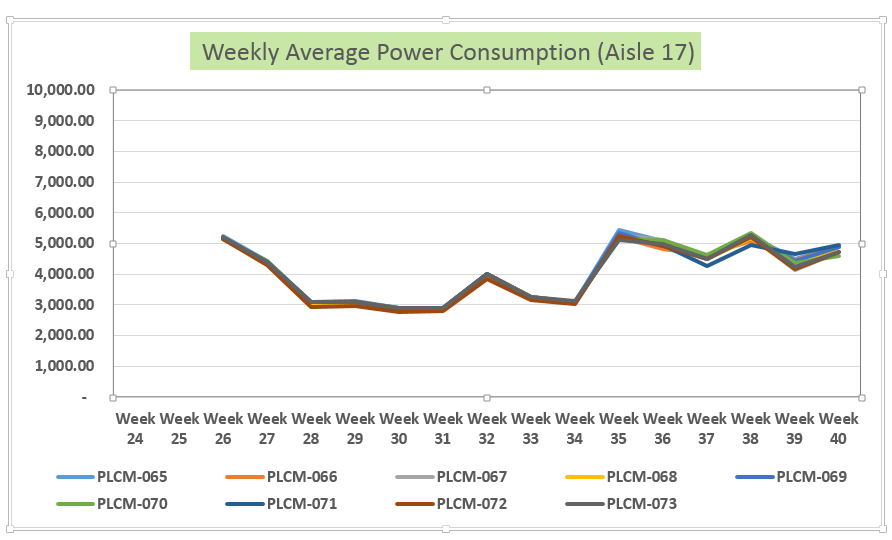 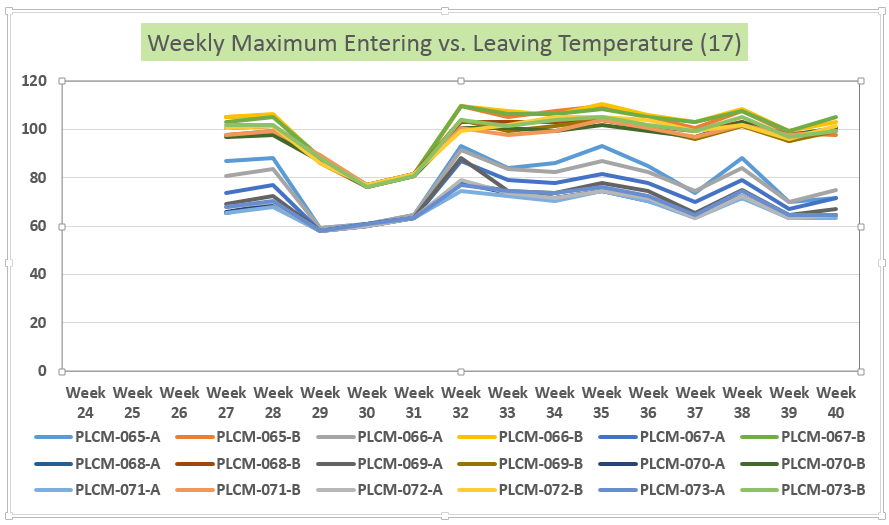 Additionally, Figure 11 clearly shows slightly higher entering and leaving temperature as well as fluctuation in the temperature readings that coincided with the power draw fluctuation of the racks within the aisle. This aisle has no containment. 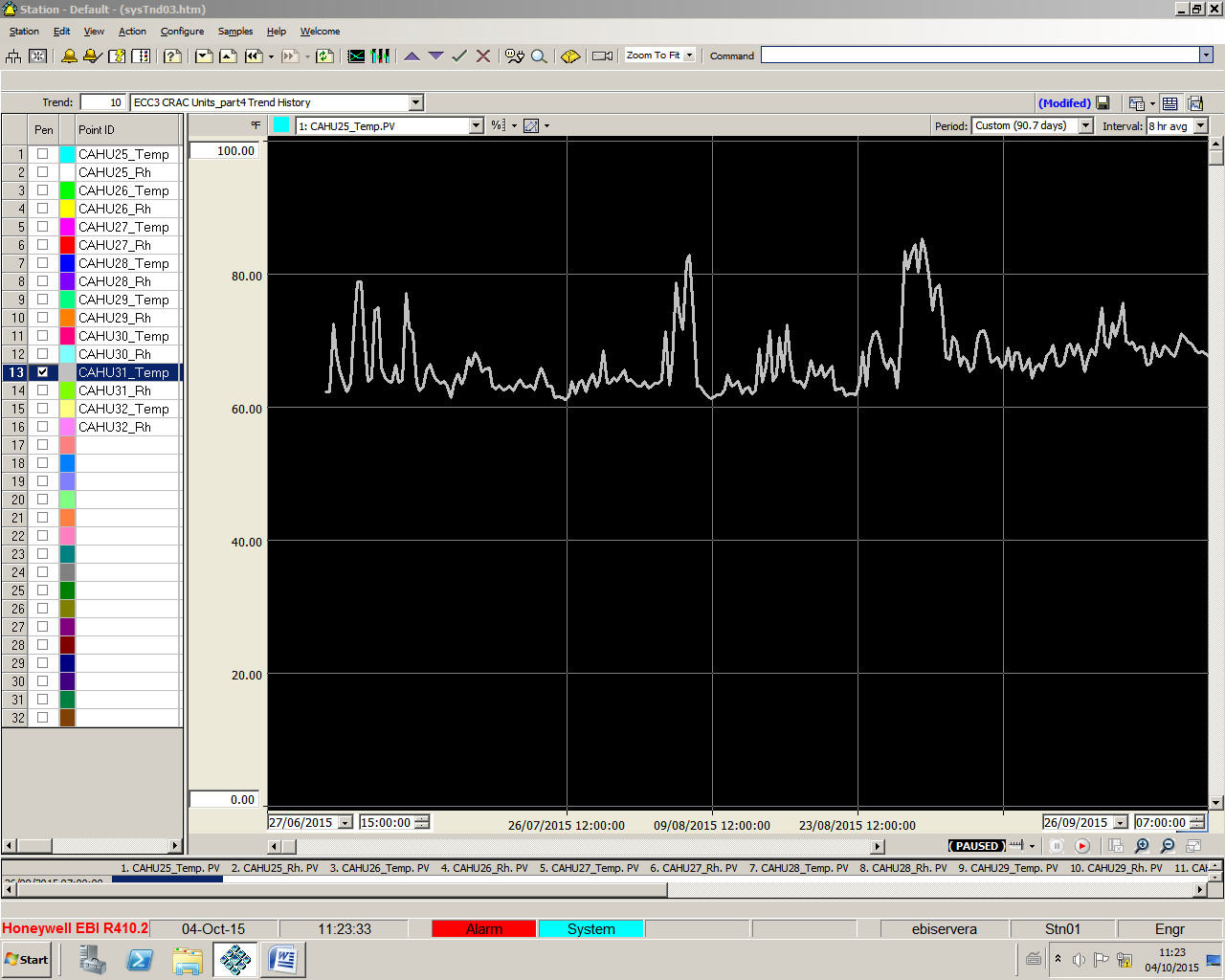 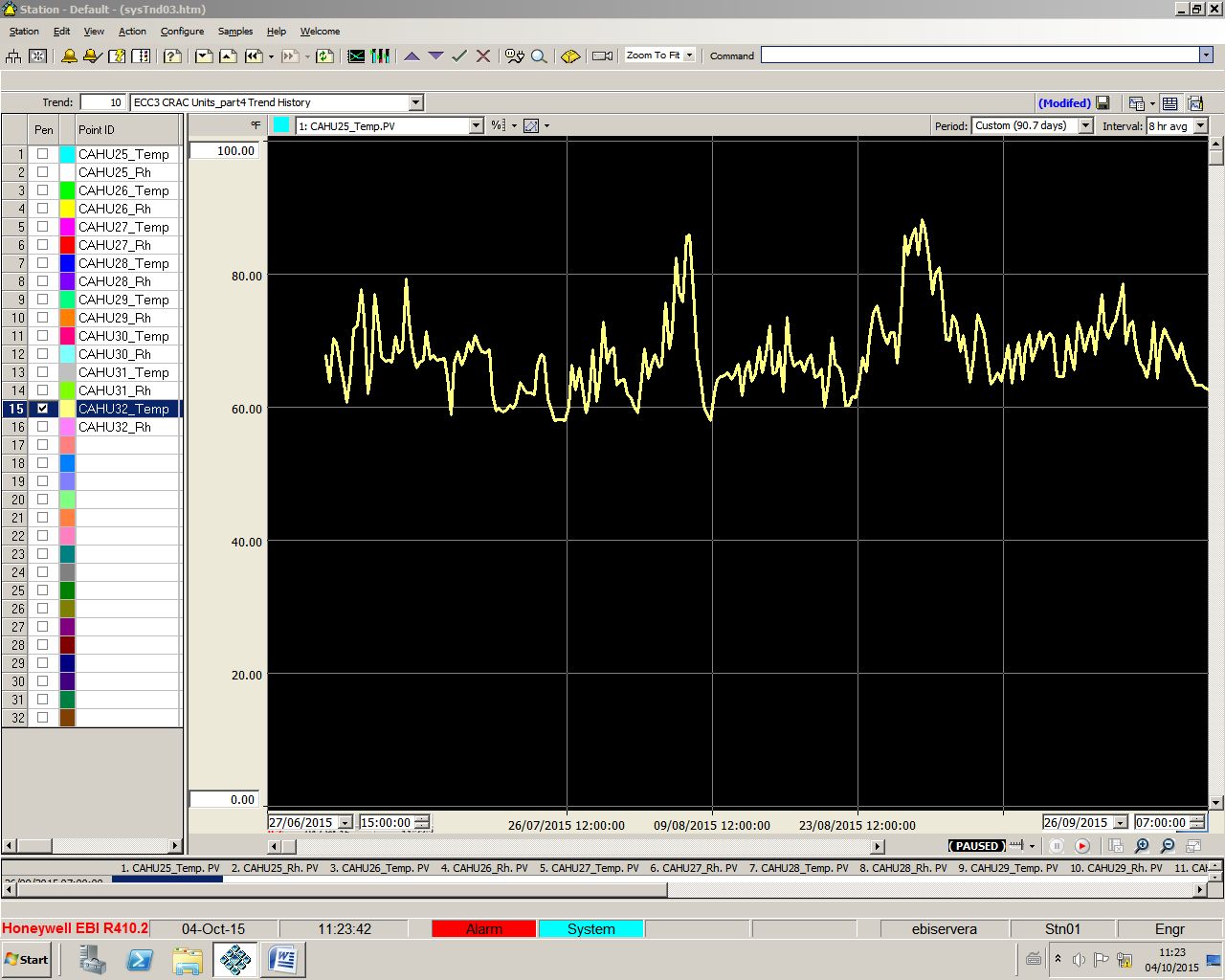 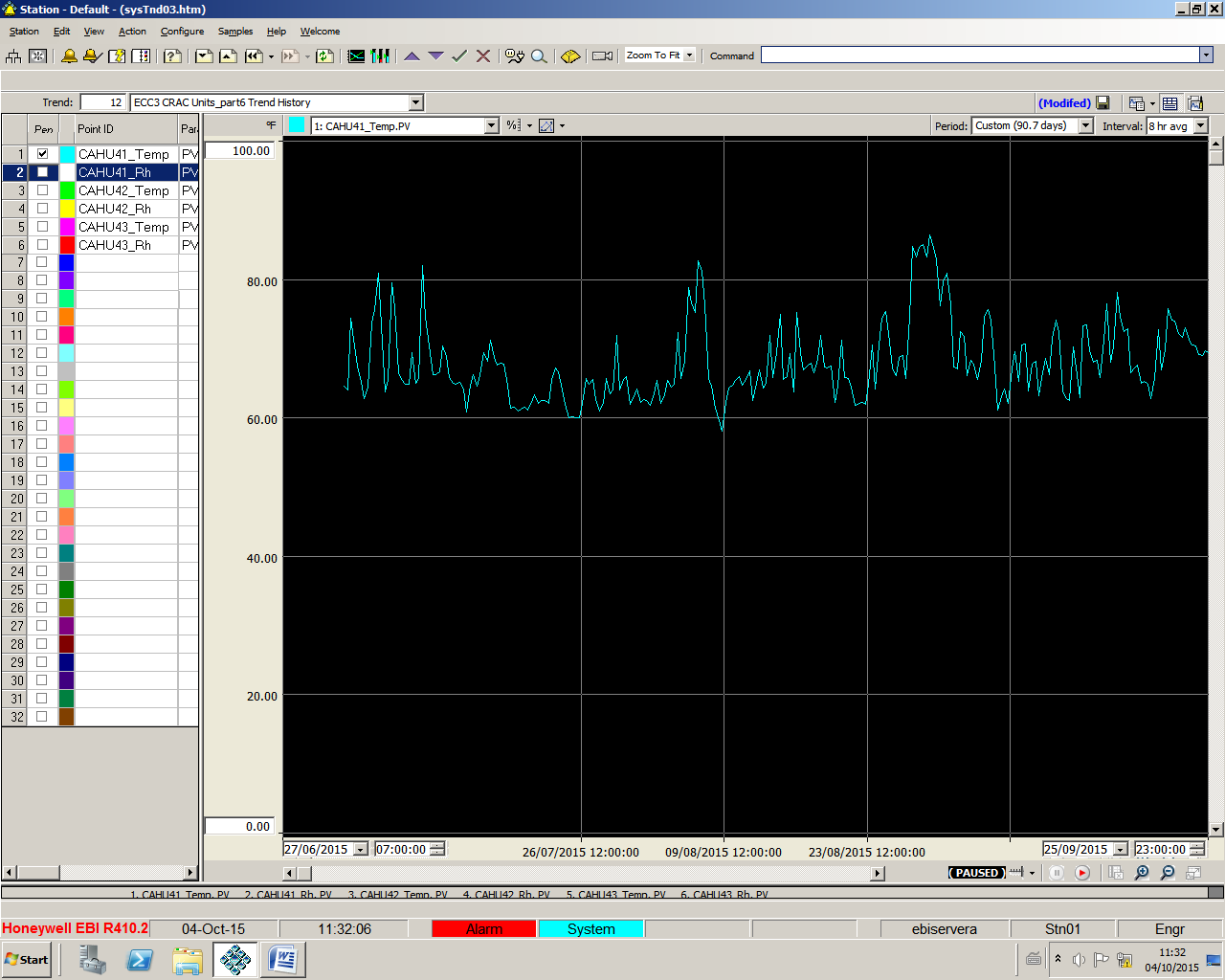 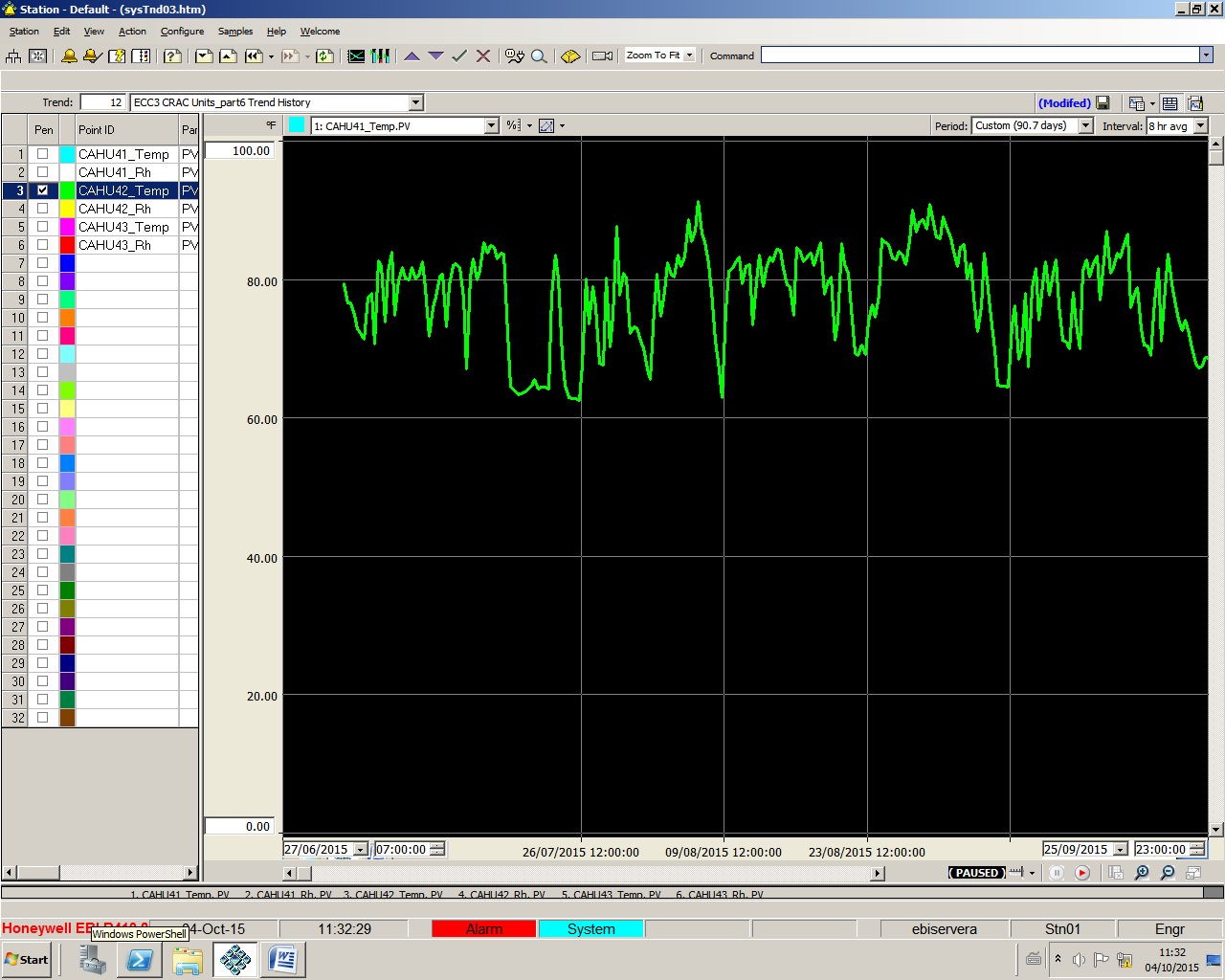 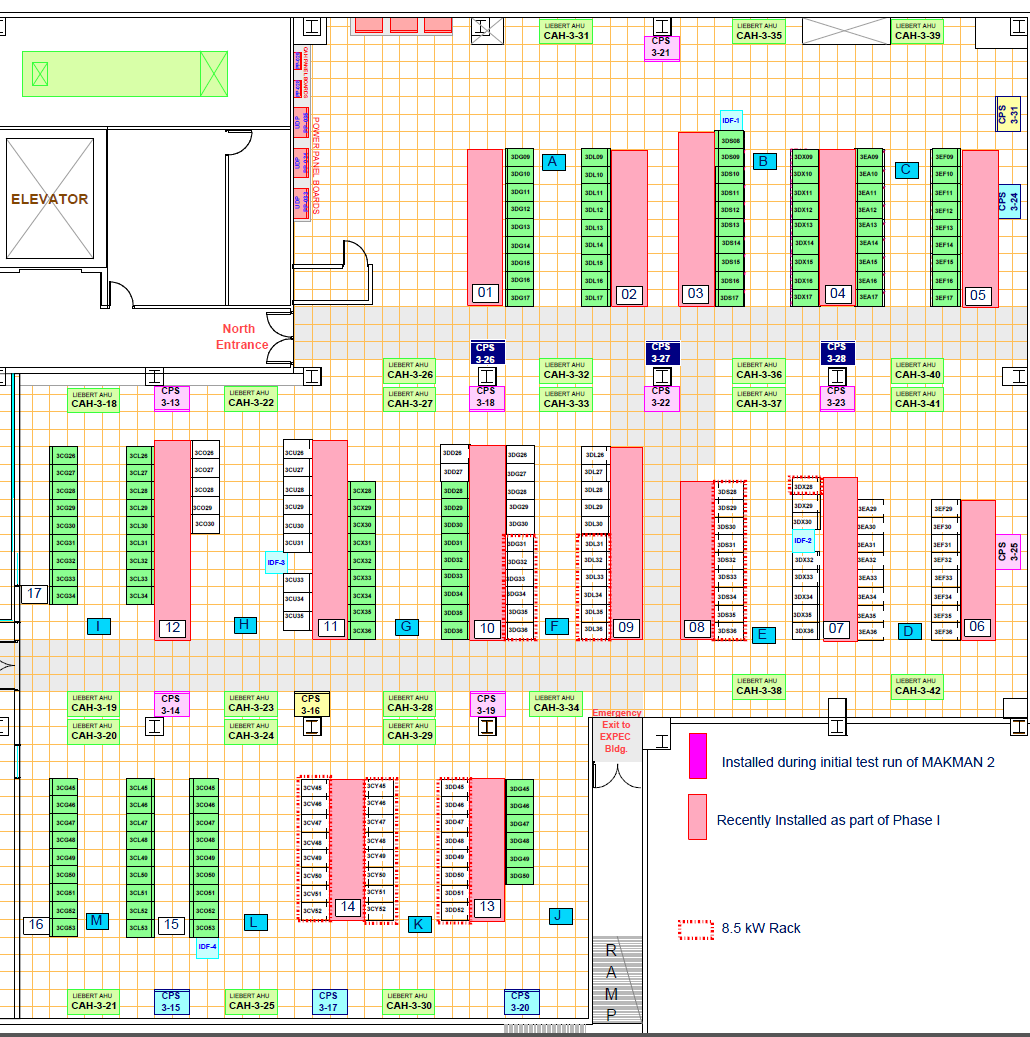 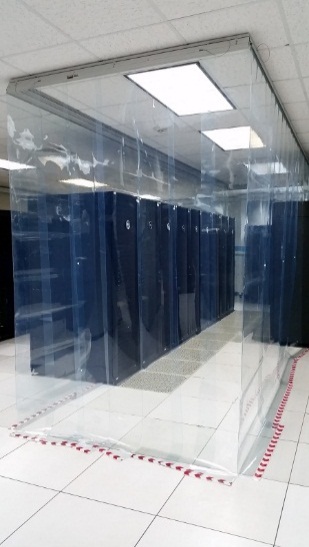 Nacianceno L. Mendoza joined the Saudi Aramco Exploration Computer Center (ECC) in March 2002. He holds a bachelor of science in civil engineering and has more than 25 years of diverse experience in project design, review, construction management, supervision, coordination and implementation. Mr. Mendoza spearheaded the design and implementation of the temperature and humidity monitoring system and deployment of Cold Aisle Containment System in the ECC.