The power density per rack (kilowatts [kW] per cabinet) is a critical number in data center design, capacity planning, and cooling and power provisioning. There have been industry warnings about a meteoric rise in IT equipment rack power density for the past decade (at least). One reason for this prediction is the proliferation of compute-intensive workloads (e.g., AI, IoT, cryptocurrencies, and augmented and virtual reality), all of which drive the need for high-density racks.

Our recent annual surveys found that racks with densities of 20 kW and higher are becoming a reality for many data centers (we asked about highest rack density) — but not to the degree forewarned. Year-over-year, most respondents said their highest density racks were in 10-19 kW range, which is not enough to merit wholesale technical changes. When rack densities are higher than 20-25 kW, direct liquid cooling and precision air cooling becomes more economical and efficient. According to what we see in the field, such high densities are not pervasive enough to have an impact on most data centers.

This does not mean that the trend should be ignored. It is clear from our latest research that average mean rack density in data centers is rising steadily, as the figure below shows. Eliminating respondents with above 30 kW as high-performance outliers, the mean average density in our 2020 survey sample was 8.4 kW/rack. This is consistent with other industry estimates and safely within the provisioned range of most facilities. 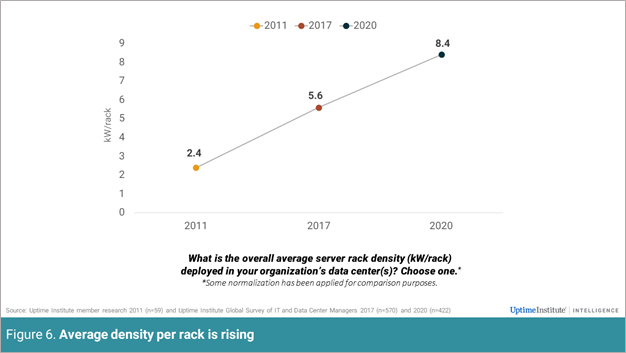 PUE over the Years

In our 2020 survey, we asked about the most common (modal average) SERVER rack density, which is perhaps a better metric than overall average density. More than two-thirds (71%) reported a modal average of below 10 kW/rack, with just 16% widely deploying 20 kW or higher rack densities (Figure 7). The most common density was 5-9 kW/rack. Overprovisioning of power/cooling is probably a more common issue than underprovisioning due to rising rack densities. 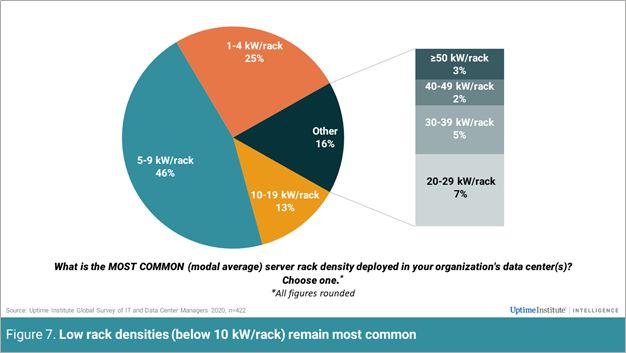 Assuming a trend that rack units will increasingly be filled with higher-powered servers that are well utilized, we anticipate that the modal average kW/rack will increase over time. Figure 8 shows that for most organizations — roughly half of those surveyed — average density is increasing, albeit only slowly. 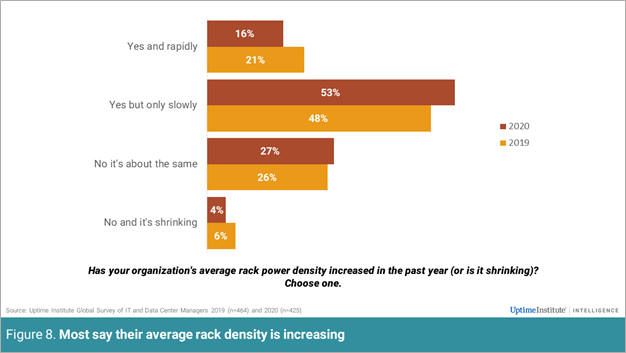 We expect density to keep rising. Our research shows that the use of virtualization and software containers pushes IT utilization up, in turn requiring more power and cooling. With Moore’s law slowing down, improvements in IT can require more multi-core processors and, consequently, more power consumption per operation, especially if utilization is low. Even setting aside new workloads, increases in density can be regarded a long-term trend.

But, as our 2020 survey findings demonstrate, the expectation for 20 kW racks throughout the industry has not manifested. We believe that many compute-intensive workloads — those that will significantly push up power use, rack density and heat — currently reside across a relatively small group of hyperscale cloud data centers and are consumed by organizations as a service.

Want to know more about this and other data center trends and strategies? Download a copy of our complete 2020 survey. 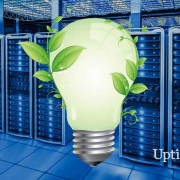 Common Factors for IT venue selection (Choosing In-house or Outsource)